Press release: Danish researchers reveal one of the big secrets of the vanilla orchid

Danish researchers can now for the first time reveal how the vanilla orchid produces the second most important aroma compound in the world. This ends the more than 30 years long race to resolve the enigmatic process. It turned out to be much simpler than expected taking the researchers by surprise. The results were published in the prestigious journal Nature Communications on June 19th. link ..>

Everyone likes the taste of vanilla. But what we are really tasting is the compound vanillin, the most abundant of the 200 flavor and aroma compounds making up natural vanilla. In spite of intensive research over the last 30 years, it is only now that researchers have succeeded to find out how the vanilla orchid produces the compound. To the surprise of the researchers, the process was much simpler than envisioned:

”For decades, the international research community thought the formation of vanillin in the vanilla orchid was a highly specialized and complex process. Our discovery that the process is rather simple took us by surprise” explains Dr. Nethaji Gallage, who June 17th defended her PhD Thesis on this topic.
She explains:  ”It turns out that a single enzyme is able to catalyze the direct conversion of ferulic acid into vanillin. We have now named the enzyme catalyzing this process vanillin synthase.”

The potent vanillin flavor is formed in the inner part of the fleshy vanilla pod. As a surprise to most people, vanillin is not present at all in the tiny black vanilla seeds we see at the bottom of our Crème blûlée or in the vanilla ice cream.

Highly sensitive vanilla orchid may have vanilla producing cousins
The genetic variation in the vanilla orchid is very low and it has no natural pollinators. So without human intervention we would not have vanilla today. This also makes it very vulnerable to fungi or insect attacks.

The scientists might just have found a way to solve this: “Many orchids closely related to the vanilla orchid are present in nature but appear not to be able to synthesize vanillin. Most likely, some of these individual plants contain the same mutations as the vanilla orchid and could be yet unrecognized vanillin producers.
The aim of future project would be to identify other vanillin producing orchids which in nature are pollinated by insect native to the environment where the orchids are growing, precisely as at the time of the Aztecs. In this manner, we may overcome a major setback due to disease,” explains Professor Birger Lindberg Møller, who was the main advisor on the PhD project.

Global race won through collaboration with industrial partner
The research resulting in the elucidation of the biosynthetic route for vanillin is based on a fruitful collaboration between researhcers at the University of Copenhagen (UCPH) and the biotech company Evolva. The results are published today in the prominent science journal Nature Communications. 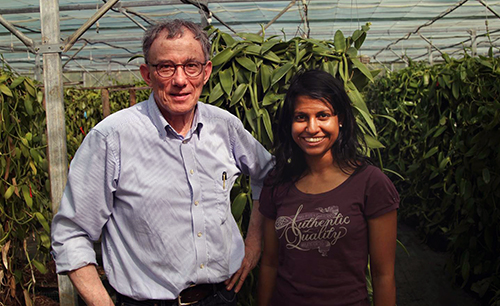 Vanillin
Natural vanilla contains more than 200 different aroma and flavor compounds. The most abundant flavor compound is vanillin and it is also the most important aroma and flavor compound in the natural vanilla extract.  We are exposed to it every day in foods, cosmetics and many other products. It is also added to animal fodder as a feeding stimulant. It is the vanillin which affords the flavor when the chef in the kitchen minces the vanilla pod and adds the fleshy pod material to the dessert! On a global basis only about 1% of the total marketed vanillin is obtained from the vanilla orchid.  By far the majority is synthesized from petrochemicals like eugenol or derived by biotechnological production in microorganisms.

Without man, no vanilla

The enigmatic story of vanilla
The vanilla orchid originated from South America, from the region which is now known as Mexico. The vanilla is obtained from the fruit pod of the vanilla orchid, a process which is complicated and involves a time consuming fermentation step. The curing process has been known to humans for more than 700 years. It was initially developed by the Totonacs and later the Aztecs who used vanilla extracts for the preparation of a chocolate-like drink. At that time the vanilla orchid was pollinated by a special bee which is now extinct or at best rare and restricted to a small geographic region in Mexico. The vanilla flower only opens for a short time and has no natural pollinators. Without the interference of man, involving hand pollination of the vanill flowers or propagation from cuttings, the vanilla orchid would not be able to survive as a species. The entire vanilla orchid based production system is highly fragile as evident from the fact that all the vanilla orchids grown at Madagascar and La Reunion originate from a single cutting! As a result, the genetic variation is extremely low and the plant is vulnerable to major attacks from fungi and vira. The commercial production takes place in shade houses where the vanilla orchids are positioned very close to each other furthering the risk of fast spread of diseases.

Shadow houses where the vanilla orchids are grown

The special enzyme
Vanillin synthase, the enzyme catalyzing the conversion of ferulic acid into vanillin, belongs to the class of enzymes categorized as cysteine proteinases. Each plant species contains about fifty different cysteine proteinases. They play a role in turn-over of proteins at specific time points of plant growth and development e.g. in a ripening fruit. In the course of evolution, natural mutations arose in one of these cysteine proteinases enabling the enzyme to convert ferulic acid into vanillin. In this way the vanillin synthase arose.  Ferulic acid, is present in most plant species because it is one of the building blocks of the plant cell wall