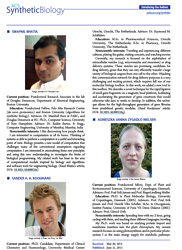 The article in the same issue discusses the Lightdriven group's current research, which has shown that it is possible to move a complete biosynthetic pathway consisting of cytochrome P450 enzymes from one compartment of the plant cell (the endoplasmatic reticulum) to the chloroplast.

The advantage of this is to let the energy-demanding P450 enzymes receive their energy directly from the photosynthetic molecular machinery present in the chloroplast.