HEALTH Scientist of the Month Awarded to Synbio Researcher 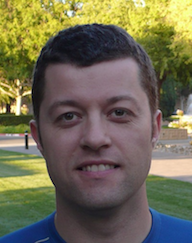 Assistant Professor Søren Gøgsig Faarup Rasmussen at Center for Synthetic Biology has been named scientist of the month by the HEALTH faculty. He played an important part in mapping the molecular masterpiece that constituted a part of the reason for this year's Nobel Prize in Chemistry being awarded to Prof. Brian Kobilka.

Søren G.F. Rasmussen had a very succesful 6 year visit to member of Center for Synthetic Biology's Scientific Advisory Board, Professor Brian Kobilka's lab at University of Stanford. It resulted in no less than six joint Nature papers (three with him as first author, one with shared first authorship), one Nature review and two Nature Methods papers as well as two papers published in Science.

At Stanford, Søren Rasmussen played a key part in the Kobilka Lab's succesful attempt to determine the 3D chrystal structure of the G protein coupled receptor (GPCR) beta2 adrenergic receptor in a complex with a Gs protein. This outstanding scientific result was coined a "molecular masterpiece" by the Nobel committee.

The widespread praise of Søren Rasmussen's research work at Stanford was echoed by Professor Kobilka himself in his recent Nobel Laureate guest lecture at University of Copenhagen on the 13th of December. He said that "Søren really stands out among the talented postdocs I've had in my lab".

The entertaining introduction to Kobilka's talk by Professor Thue W. Schwartz underlined the close relationship between Kobilka's Lab and pharmacology and neurobiology experts at University of Copenhagen over the years. Many of these researchers participate in the Center for Synthetic Biology.

Søren has returned to University of Copenhagen to establish his own research group focusing on GPCRs and take a position as one of three principal investigator recruitments at the crossdisciplinary Center for Synthetic Biology.

Read more about the relationship between the Kobilka lab and scientists at Center for Synthetic Biology here:
https://synbio.ku.dk/news/nobel_kobilka/