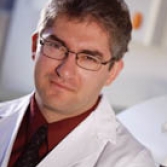 We are studying interactions between surfaces of inorganic materials and model biological systems. Such interactions are important in a number of contexts, such as implant integration and biosensor development, and also present basic challenges. The model systems we focus on include liposomes (spherical lipid shells enclosing an aqueous compartment), lipid bilayers, and platelets (thrombocytes) on titania. Our interest in titania (TiO2) is driven by its applications as a biomaterial used in a variety of implants, as well as interesting surface properties that affect the behaviour of the model biological systems.

Liposome behaviour at surfaces is driven by the favourable lipid-surface interactions, the origin of which (in terms of the contributions of individual forces) remains a subject of some debate. It is further complicated by the kinetic effects (energy barriers associated with liposome deformation and rupture). Our aim is to unravel these contributions so that we can understand and control the morphology and composition of lipid assemblies at inorganic surfaces. On the other hand, liposomes can also be used as probes to study surface properties.

In particular, we identified an effect of the surface-bound divalent cations such as Ca2+ on the behaviour of phosphatidyl serine (PS)-containing liposomes on TiO2. This led us tohypothesize that such effects could also be observed in more complex biological systems. We used platelets to examine this hypothesis because of their importance in reactions to biomaterials, and indeed observed that their activation by TiO2 surface depended on whether Ca2+ was present or not; their activation on glass and in solution is independent of extracellular Ca2+.

Platelet activation is a crucial step in blood coagulation. It is a complex process involving the expression on the platelet surface and secretion into the surrounding media of a diverse array of adhesion molecules, pro-coagulant, pro-inflammatory, angiogenic, and growth factors.

Recent studies suggest that platelet activation is selective and they can tune their
microenvironment in response to different stimuli, thus controlling the wound healing
process. Indeed our results represent an example of such selectivity.