A PCR machine (also called thermocycler) is a relatively simple and inexpensive tool that you can use to focus in on a segment of DNA and copy it many of times over. So, even with a small DNA sample, a PCR allows to you make copies of the DNA so you have enough to analyze. 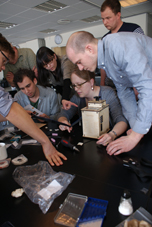 The OpenPCR-machine is one of the interesting results
emerging from the innovative Do-It-Yourself-Biotech
(DIYbio) movement, which is growing rapidly in numbers
all over the world.

DIYbio is all about making everybody smarter faster, and
taking biology and biotech to an accessible level for both
scientists and laypersons in an environment outside the
established. And in a sense "giving biotech back to the
people".

The build-it yourself machine assembled on the day is an 'open source' model and its  development has been funded through crowdfunding.

Once the OpenPCR machine was assembled, it was tested against a conventional PCR machine and it showed to be fully competitive, by producing fantastic, clear bands.

A PDF of the results can be seen here.