Billions of functions in the human body are controlled by enzymes, so understanding how these operate could open the gates on new medicines for just about any ailment. New insight into these biological molecules could also kick off novel green and sustainable catalysis, ushering in new chemical manufacturing methods which cause less pollution and produce less waste.

An old hand in a new job

Hatzakis has been associated with the Department since 2006 whence he started in a Post Doc position. In 2011 he was promoted to Assistant professor and he has proven a prolific and highly skilled researcher, who has published in high profile periodicals such JACS, ACS chem. Biol and no less than twice in Nature journals. 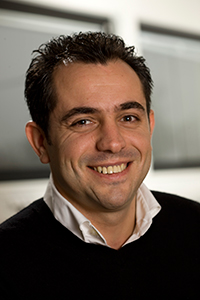 “Biologists tend to say, that we already understand enzymes, but we really do not. Not at the molecular level. So there definitely is a place for using physical principles to understand biology”, says Hatzakis.

One of the enzyme systems that Nikos Hatzakis is working on is involved in ailments as diverse as allergies, dwarfism, cardio-vascular diseases, and a whole host of diseases caused by hormonal imbalances. Together with an inter-disciplinary team of researchers Hatzakis has employed a method to study single enzymes behavior in an environment very similar to that found within and on the surface of cells. His methods have already attracted considerable interest in the medical community.

“Doctors are starting to realize that the secret to enzymatic function is to be found on the nano-scale. So some are sending me enzymes from patients asking me to figure out why this particular enzyme is problematic and I hope to provide the understanding required for a solution”, says Nikos Hatzakis, who hopes to attract bachelor as well as master students who are interested in studying enzymes for their theses from the level of single molecules up to the level of human diseases.