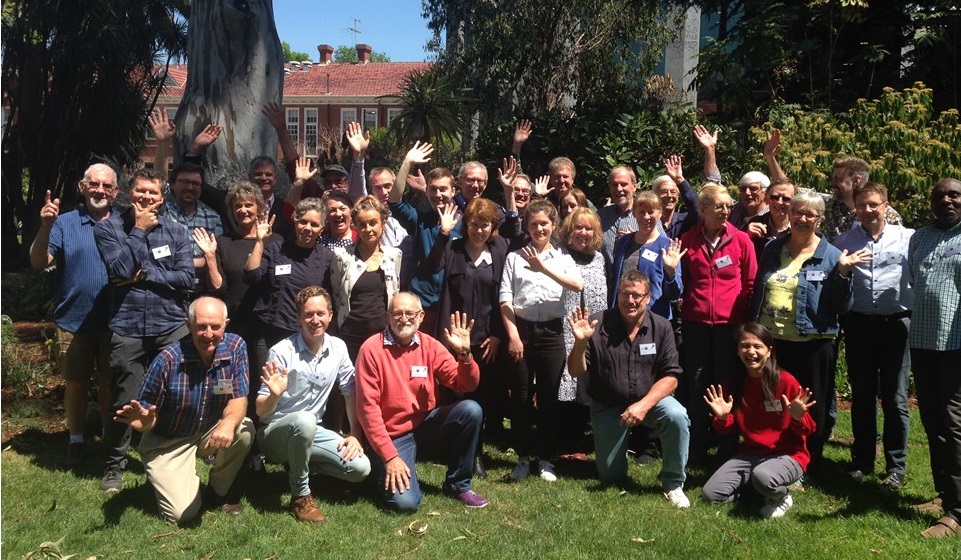 The 1st Cross-Continent Eremophila Conference took place this week at University of Melbourne bringing together an exciting diversity of Eremophila experts: From plant scientists to neurobiologist and pharmacologists, from social scientists to social enterprise entrepreneurs, guerilla gardeners and private collectors. A rich and valuable variety in deep and passionate knowledge about the Desert-loving flower and its connection to the land and the traditional custodians made the 2-day conference a great success.

We acknowledge that the conference took place on the lands of the Wurundjeri people who have been custodians of this land for thousands of years, and acknowledge and pay our respects to their Elders past and present. 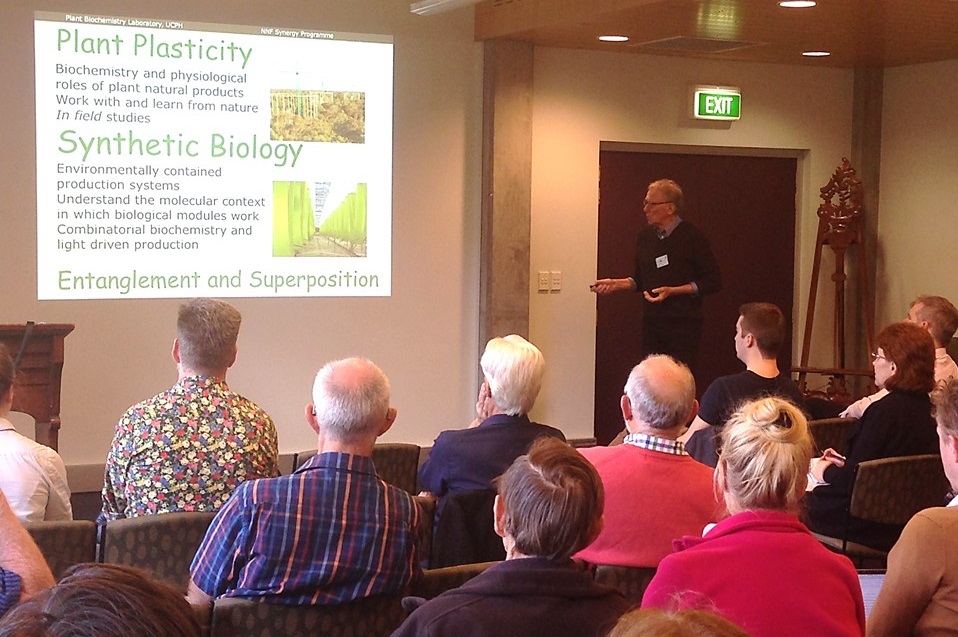 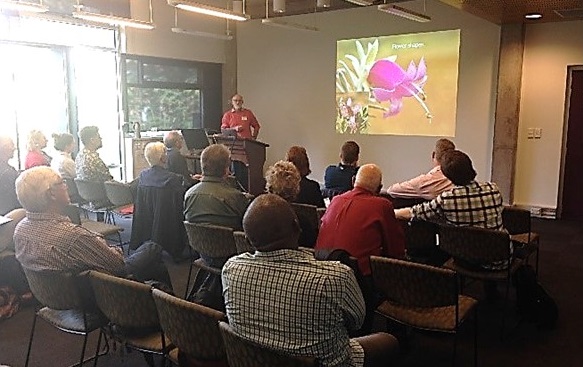 He was followed by a session focused on the taxonomy and phylogeny of Eremophilas. Bob Chinnock presented his foundational work in the construction of the Eremophila Monograph and Bevan Buirchell – who has undertaken extensive travel in the Western Australian desert to collect eremophilas for the project – showed some of his photos of the wonderful diversity of Eremophilas found on his travels. 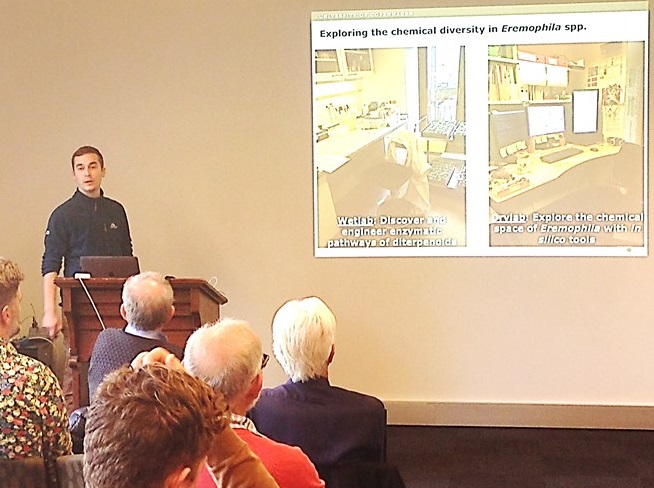 Session 1 was concluded with a panel discussion with further input from Ron Dadd and Phil James from Perth in Western Australia, both very keen Eremophila enthusiasts who has established renowned Eremophila gardens in Western Australia. Their knowledge, knowhow and enormous variety of plants in their gardens is a great and important resource to the Desert-Loving Project.

Biodiscovery and benefit-sharing
In the Eremophila genus are particular plants that have been used by the Australian indigenous people for thousands of years as part of their traditional medicine. As Part of the Desert-Loving Project we are therefore exploring how to create a benefit-sharing fund to share IP and ensure rights for the indigenous people of Australia. This important conversation was in focus in session 2. 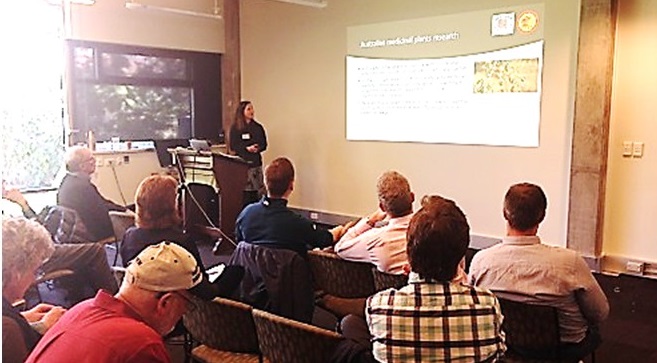 Susan Semple presented in collaboration with David Claudie from Cape York. Though he could not be at the meeting, the presentation had been prepared with him. He and his indigenous community have been collaborating with Susan Semple for a number of years. Together they have explored the compounds of their traditional medicine found in the plants on the community’s area. 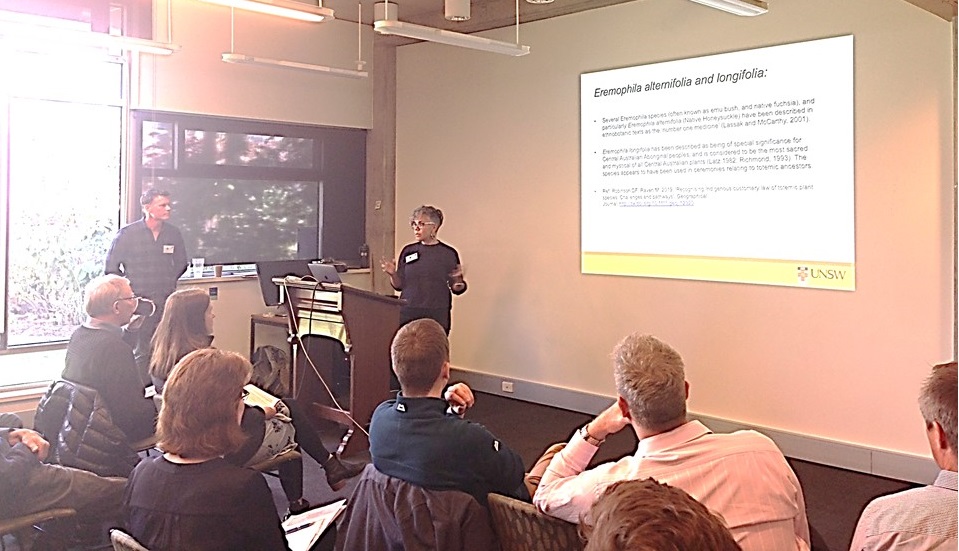 Social scientists Margaret Raven and Daniel Robinson presented their work and their significant expertise on access and benefit-sharing, customary law and culturally significant species, such as the Eremophilas. Their work is also focused on the implementation of the Nagoya protocol in Australia, where the agreement has been signed, but not ratified yet. This is contributing to creating challenges for the unfolding of new and respectful approaches to the ancestors of the land.

Peta Cobourn, social entreprice manager at the Purple House in Alice Springs in Central Australia, brought the story of the establishment of the Purple House’s life-saving work of bringing dialysis to remote communities and making Purple House a ‘safe-space’ for indigenous people. Among other things, the initaitve has founded the coorperative Bush Balm that produces lotions and balms made with ingredients from Eremophilas. The plants used in the products are collected by their traditional guardians around Alice Springs and prepared according to their tradition and knowledge. 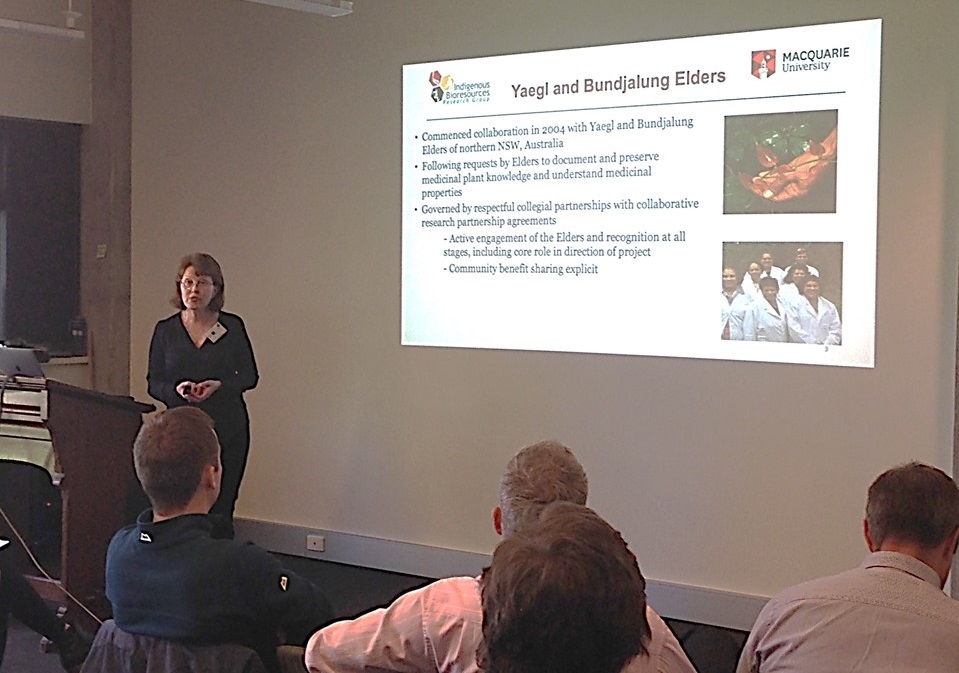 Natural products chemist Joanne Jamie shared with us her journey of involving the Yeagl Elders and the young generation of the indigenous communities around Maquarie University in science and traditional knowledge initiatives. This kind of empowerment with has had immense influence on the young people. 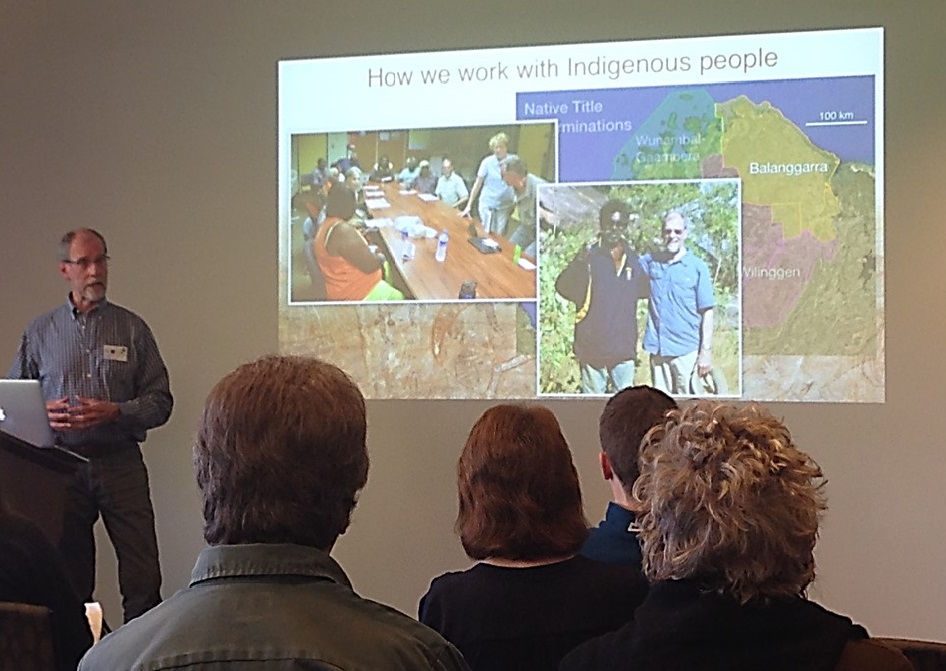 Andrew Gleadow, chief Science Advisor to the Kimberley Foundation, presented his and the foundation’s work in finding and dating rock art in the Australian Kimberleys. This work, which involves close collaboration and negotiation with local communities has been highly rewarding, not only science-wise, but also personally for Andrew Gleadow. 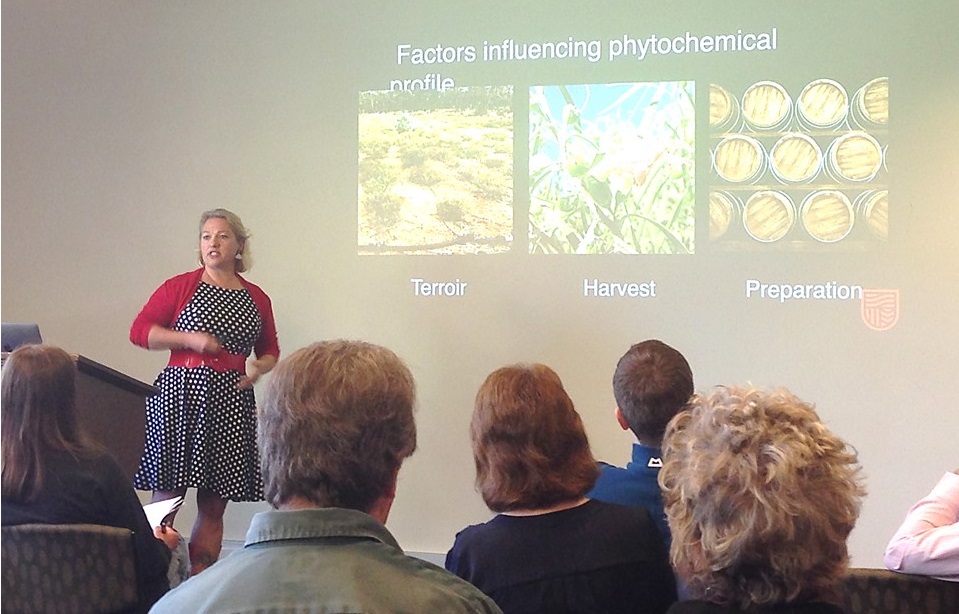 Colette Geier recently begun her PhD studies that focuses on the effect of Ngurambang (country and customary practice) on the phytochemistry of Yadhandha (Eremophila longifolia). In this, she is exploring the effect of habitat, harvest and herbal preparation on the bioactive compounds of the plant.

This laid the ground for the foundation of a multi-facetted dialogue on collaboration with indigenous communities and benefit-sharing. As Margaret Raven stated “This is not an easy conversation, but it is a necessary one”. Many lives and ways of life are affected by our ability to find a fruitful ground for this to move forward on.

Target Molecule Analyses and Pathway Discovery
The analytical work of the Desert-loving Project was in focus in the morning session of the second conference-day.
Introduced by session chair Claus Juul Løland, Susan Semple and her postdoc Chi Ndi presented their work on the samples collected by Bevan Buirchell  in Western Australia. Particularly they have explored the antimicrobial resistance and effects on the efflux pumps to enhance effects of antibiotics of sample extracts. They also reported the beneficial exchange of students between Susan Semple’s lab at University of South Australia and Dan Stærk’s group at University of Copenhagen. 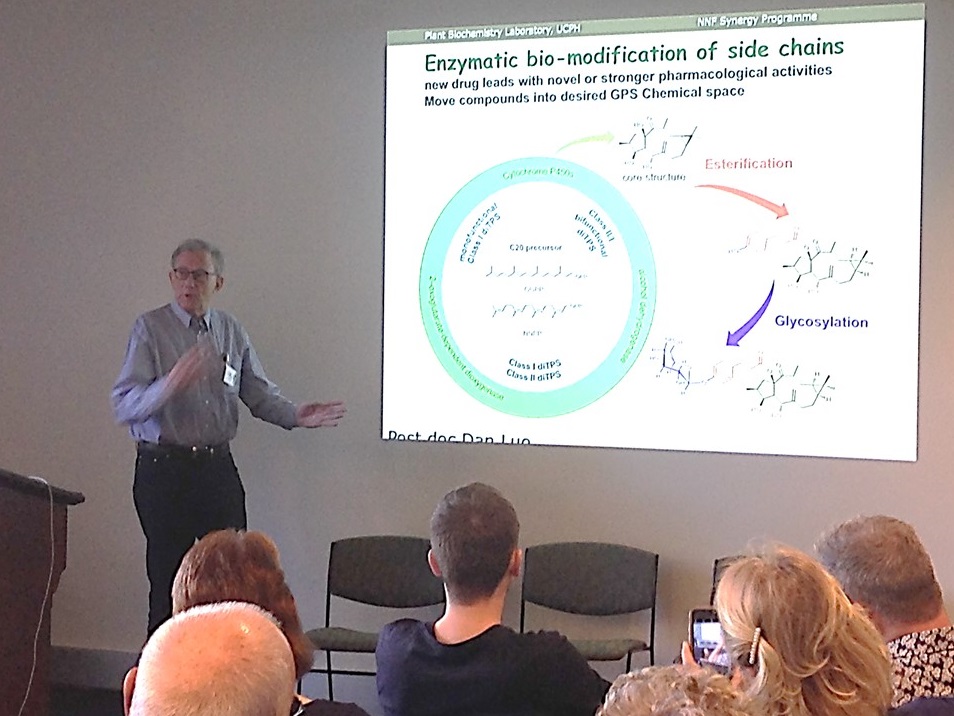 Dan Stærk reported on his further work with the samples in Copenhagen putting them through his high-resolution analysis of the compounds where a lot of interesting activity has been found. Birger Lindberg Møller followed with the work of the group in Copenhagen, lead by Allison Heskes, and the elucidation of the pathways of the highly complex Eremophila compounds. 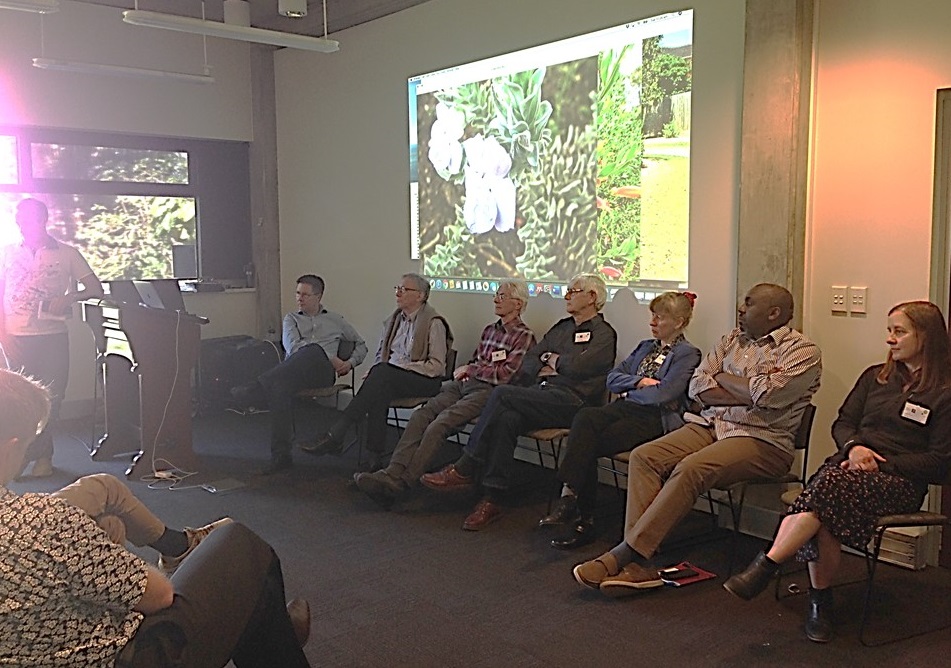 Eremophila for the Future – Neurobiology, Pharmacology
Bevan Buirchell introduced the last session of the conference. Focusing on the neuropharmacological and alkaloids potential of the E compounds.

Rohan Davis from Griffith University in Brisbane reminded the audience of the sobering truth of natural product drug discovery: Only 1:10.000 drug lead make it all the way to the market. Further, he shared with the audience his work with the establishment of NatureBank and the inclusion of the Nagoya protocol to incorporate and collaborate with indigenous resources.

Biogeography and interaction with pollinators

As the last part of the conference, Dan Murphy and Mike Whitehead from University of Melbourne introduced us to the biogeography of the arid zone, which is home to most Eremohilas, and their pollinators. 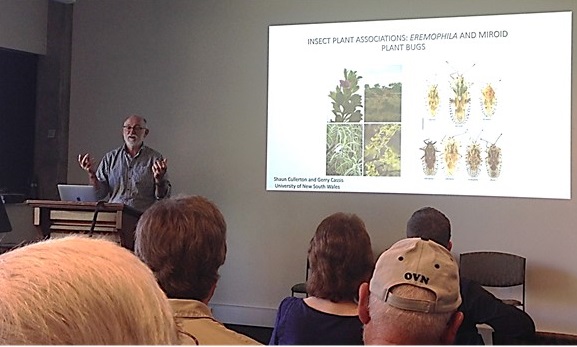 Bevan Buirchell shared on the interaction between plants and insects and the implication for Eremophila phylogeny, showcasing the work also done with Gerry Cassis.

Organization
The conference was organized by the ‘Desert-Loving Therapeutics’ project group, supported by their Novo Nordisk Foundation Synergy Grant and hosted at the University of Melbourne. 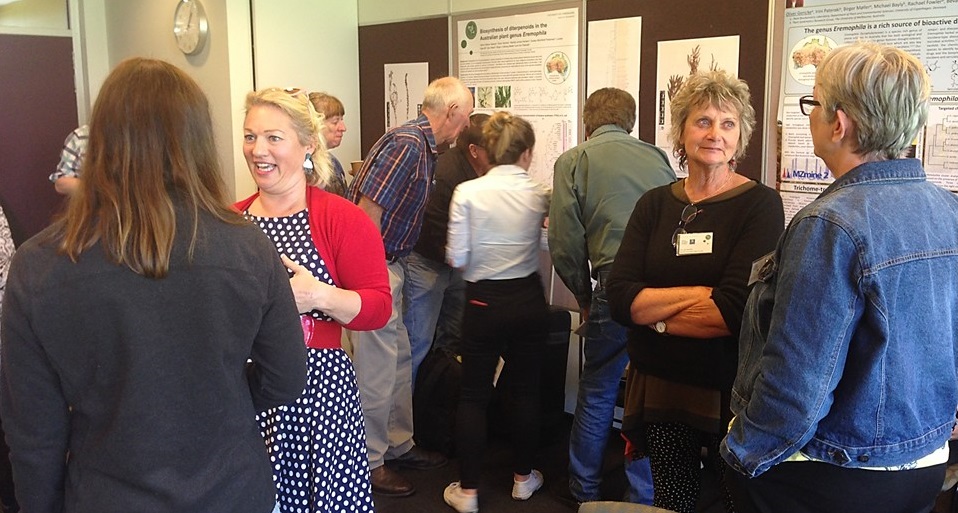 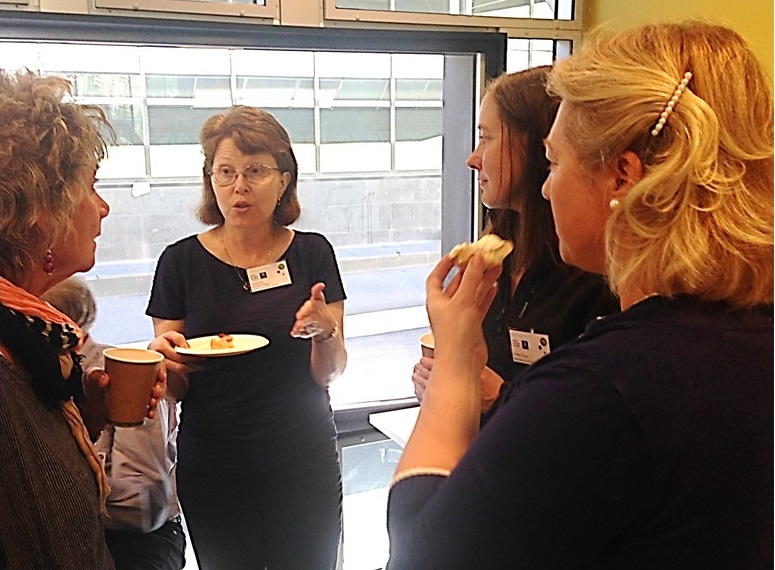 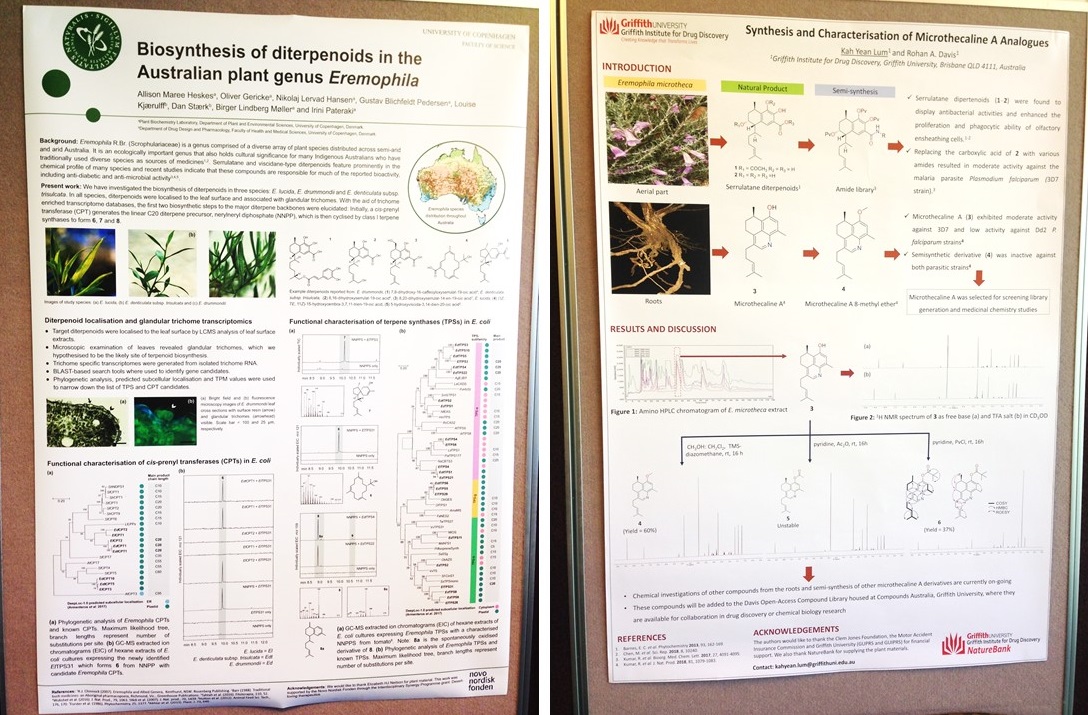 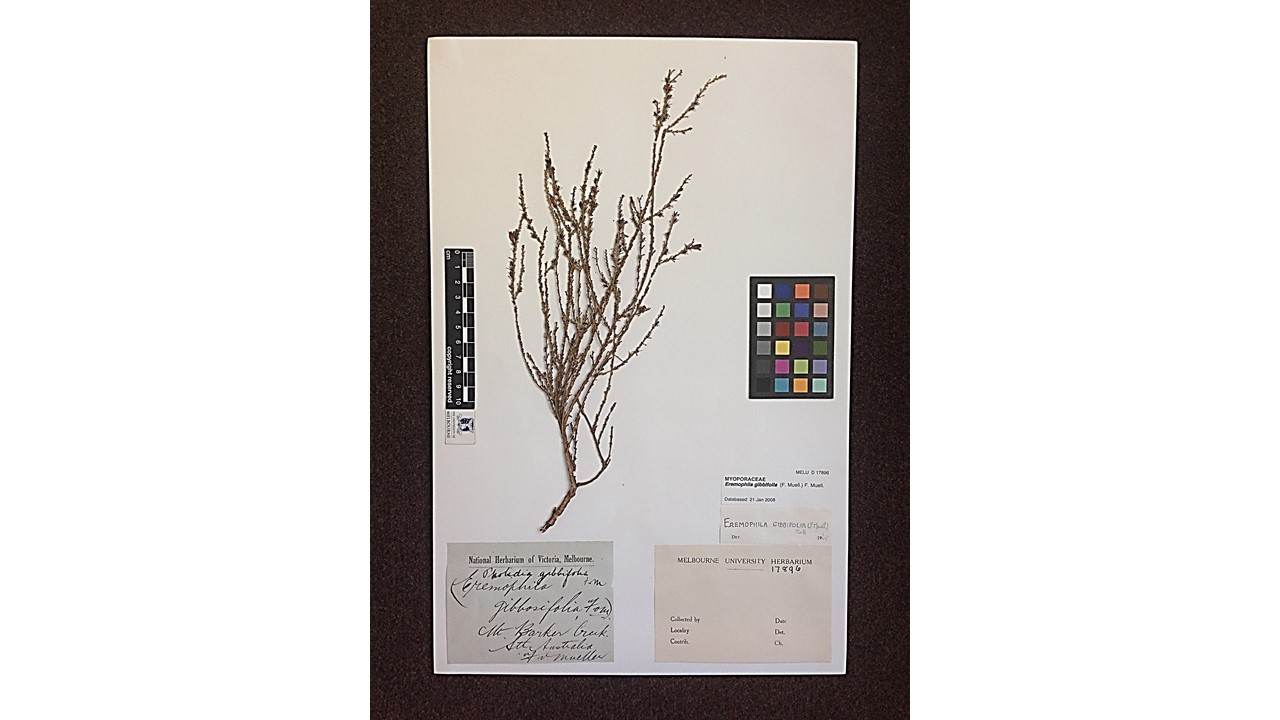 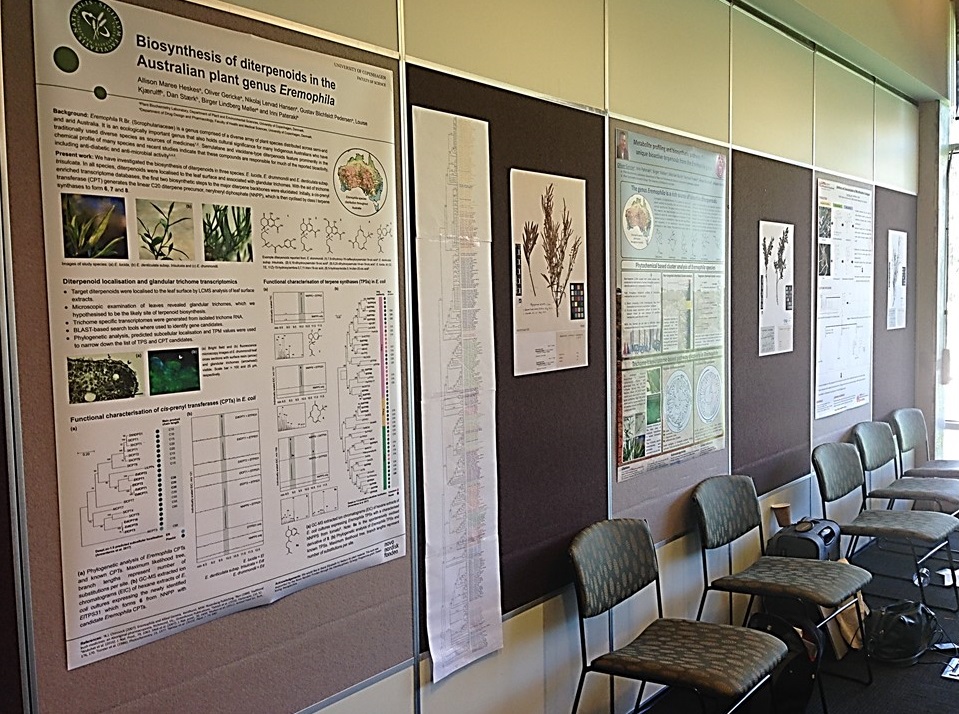 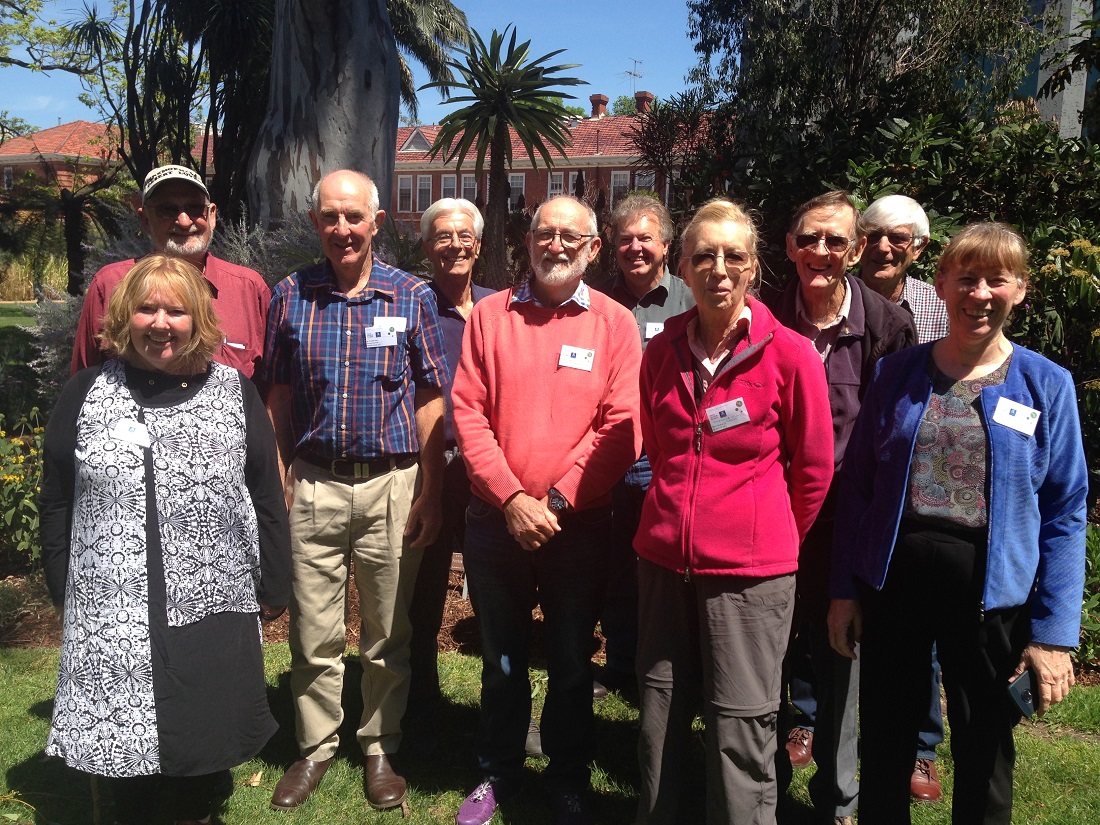 All Conference Abstracts can be found here

More about the conference

Find more about the conference here: