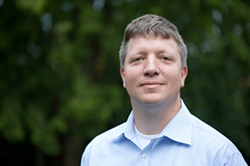 Abstract: Complex protein structures, such as membrane receptors, regulate many aspects of cellular function including the initiation of signal transduction pathways. Oligomeric transmembrane receptors composed of multiple subunits can often be assembled into more than one stoichiometry. Different receptor assemblies exhibit different agonist sensitivity, functional characteristics, and desensitization rates. We have developed methods to quantify at the single molecule level the assembly of membrane receptors from the endoplasmic reticulum and from the plasma membrane. Using nanovesicles composed of native cell membranes allows us to isolate and study oligomeric structures from intercellular organelles. By restricting the size of the vesicle, single intact receptors can be isolated from the cell. The receptor remains embedded in a native cell membrane providing an environment capable of maintaining its structural integrity. We have demonstrated the versatility of this method by isolating and studying several classes of membrane receptors. We have also utilized arrays of nanoapertures in a thin metal film to isolate small portions of the plasma membrane of live cells. This has enabled us to isolate and study membrane receptors expressed on the surface of the cell. We have applied these techniques to determine the assembly of nicotinic receptor and the effect of ligands on this process.