Biotech breakthrough: Sunlight can be used to produce chemicals and energy

Researchers at the University of Copenhagen have discovered a natural process they describe as reverse photosynthesis. In the process, the energy in solar rays breaks down, rather than builds plant material, as is the case with photosynthesis. The sunlight is collected by chlorophyll, the same molecule as used in photosynthesis. Combined with a specific enzyme the energy of sunlight now breaks down plant biomass, with possible uses as chemicals, biofuels or other products, that might otherwise take a long time to produce. By increasing production speed while reducing pollution, the discovery has the potential to revolutionize industrial production. The research results have now been published in Nature Communications.

The petrochemical industry is indispensible for the functioning of society. However, it remains problematic for both environment and climate. Danish researchers based at the University of Copenhagen have now made a breakthrough with the potential to transform the way we use our Earth's natural resources:

“This is a game changer, one that could transform the industrial production of fuels and chemicals, thus serving to reduce pollution significantly," says University of Copenhagen Professor Claus Felby, who heads the research.

"It has always been right beneath our noses, and yet no one has ever taken note: photosynthesis by way of the sun doesn’t just allow things to grow, the same principles can be applied to break plant matter down, allowing the release of chemical substances. In other words, direct sunlight drives chemical processes. The immense energy in solar light can be used so that processes can take place without additional energy inputs,” says Professor Claus Felby.

Postdoc David Cannella, a fellow researcher and discoverer, explains that, "the discovery means that by using the Sun, we can produce biofuels and biochemicals for things like plastics – faster, at lower temperatures and with enhanced energy-efficiency. Some of the reactions, which currently take 24 hours, can be achieved in just 10 minutes by using the Sun."

What reverse photosynthesis is all about

Researchers have discovered that monooxygenases, a natural enzymes also used in industrial biofuel production, multiply their effectiveness when exposed to sunlight:

"We use the term "reverse photosynthesis" because the enzymes use atmospheric oxygen and the Sun's rays to break down and transform carbon bonds, in plants among other things, instead of building plants and producing oxygen as is typically understood with photosynthesis", says Postdoc Klaus Benedikt Møllers

Researchers do not yet know how widespread "reverse photosynthesis", using light, chlorophyll and monooxygenases, is in nature, but there are many indications that fungi and bacteria use reverse photosynthesis as a “Thor's hammer" to access sugars and nutrients in plants.

The breakthrough is the result of collaborative, multidisciplinary research at the Copenhagen Plant Science Centre that spans the disciplines of plant science, biotechnology and chemistry. The research is mainly funded by the Danish Council for Independent Research.

"Reverse photosynthesis" has the potential to break down chemical bonds between carbon and hydrogen, a quality that may be developed to convert biogas-plant sourced methane into methanol, a liquid fuel, under ambient conditions. As a raw material, methanol is very attractive, because it can be used by the petrochemicals industry and processed into fuels, materials and chemicals.

Additional research and development is required before the discovery can directly benefit society, but its potential is, “one of the greatest we have seen in years,” according to Professor Claus Felby. 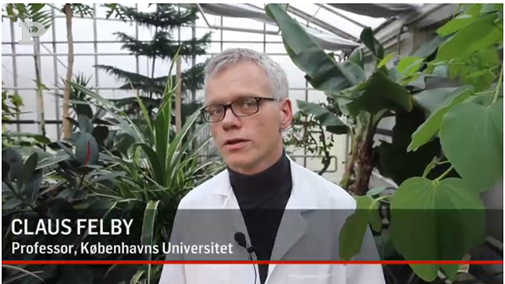 The result can be recreated by following this recipe:

Everything is mixed in a test tube and exposed to sunlight. The biomass is then completely or partially broken down.

In practice, this means that it becomes easier to break down larger sugar molecules into smaller constituents, which can then be used as clean energy in ethanol production for cars and ships, plastics, biogas, methanol, etc.

Without sunlight, it would take hours or days to achieve the same transformation. The process takes only five minutes when exposed to sunlight.