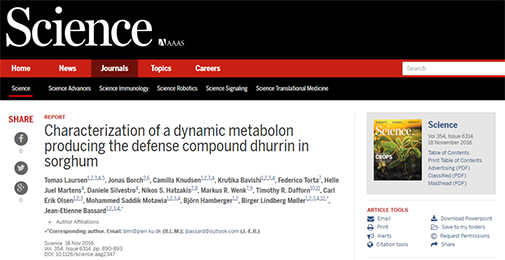 For decades scientists have hypothesized on the existence of so-called metabolons in plant defense systems. They are multi-enzyme complexes that come together dynamically upon an environmental signal and produce a desired compound that will fend off attackers of the plant.

While circumstantial evidence of metabolons have been gathered en masse over the last three decades, none before have been able to prove their actual existence. Now, with the combination of cross-disciplinary expertise, a well-studied model system and the exploration of new technology, the proof could finally be obtained.

First author Tomas Laursen explains: “Plant membrane structures are notoriously difficult to study. It is an extremely complex system and we have been on the hunt for these metabolons for ages. The breakthrough came when we employed a novel technology for extracting the proteins without prior treatment of detergent. This allowed us to isolate the intact complexes, which otherwise dissociates.”

Tomas Laursen is Center for Synbio PhD-alumni, now working as a postdoc at the Joint Bioenergy Institute at UC Berkeley in the US. Among his co-authors are several scientists from Center for Synthetic Biology and Department of Plant and Environmental Sciences at UCPH.

Prominent Editorial intro by SCIENCE
In a prominent two-page introduction to the paper, SCIENCE has asked experts in the field Mehran Dastmalchi and Peter J. Facchini to comment on the paper. They detail just how big of a task the scientists have accomplished. Referring to both the current and earlier work by the Synbio-group they praise the work as both elegant and a pinnacle of earlier groundbreaking work:

“Of critical importance is the demonstration that the membrane itself is an integral part of the metabolon. (…) Remarkably, Laursen et al. were able to carve out discrete regions of the ER bilayer and determine the precise phospholipid composition of isolated particles containing the dhurrin metabolon.”

Larger implications
A number of years and many man hours have gone into the scientists’ unveiling of the intricate structures of plant defense compound production.

Tomas explains “Understanding how plants defend themselves is in itself extremely interesting. However, this knowledge will also enable us to understand the adaptive features of plants in relation to e.g. environmental changes and thereby foresee how or if the plants will adapt to a changing environment”

“What is also crucial is that among the defense compounds we find many medicinal drugs and other high-value compounds used by humans. Imperfect channeling and release of toxic intermediates currently hamper production of these products in large scale. Understanding the mechanism behind the streamlined in planta production will give us important clues as to how we make higher yielding bioproduction of these compounds.“

In the study the scientists have used the model plant Dhurra which is a stable food crop to millions of people in the World.  It contains the so-called cyanogenic glucosides in specialized cells. Upon drought or when attacked by insects or grazing cattle, the plant releases the highly toxic compound cyanide, making it poisonous to ingest.  The same compound is found in bitter almonds as well as in apple seed.

First author Tomas Laursen did his PhD with Center for Synthetic Biology.
Read more about his work here ...>

A number of scientists have contributed to the paper, both from Center for Synthetic Biology, Department of Plant and Environmental Sciences, UCPH and abroad. 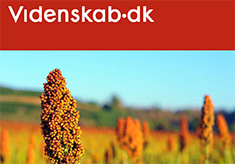 The publication of the study has been featured extensively in both Danish and International media
E.g. at the Danishs science newssite Videnskab.dk