Get a short sneak peak of their presentation here ...> 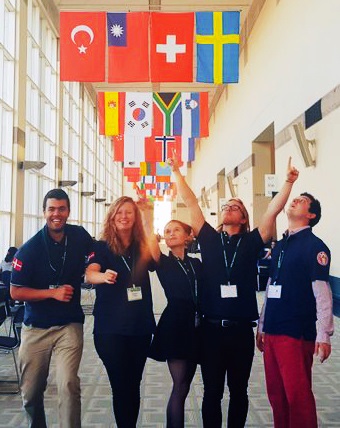 Project SpaceMoss is conducting research in ways to apply synthetic biology to the challenges to space exploration and colonization of Mars.It is an interdisciplinary project that combines two fields that are leading the way into the future: Astrophysics and Synthetic Biology. Astrophysics and human curiosity are propelling Martian colonization, however missions face a number of problems such as cost, sustainability and independence from Earth to make such an undertaking feasible.

This is where Synthetic Biology could provide the solution
by making human missions to Mars
more long termed, sustainable and low cost

Project SpaceMoss proposes to genetically modify moss to produce compounds that could help sustain an environment fit for colonization of Mars. Our project has three focus areas: Testing moss's ability to survive on Mars, genetically modifying moss to produce useful materials and educating and inspiring the general public about synthetic biology and space exploration.

Resveratrol
Working closely with the Center for Synthetic Biology, Plant Biochemistry section at University of Copenhagen, the team has successfully transformed moss with DNA constructs coding for an "Anti-Freeze Protein" (AFP) and gene from a metabolic pathway in plants that can synthesize the phenol "Resveratrol".

The AFP gene we use in the transformation procedure originates from an insect, the spruce budworm, and functions by lowering the freezing point of the cytosol of the cells, by sequestering ice crystals upon the surface of the protein, preventing crystallization. We hope to improve the viability of moss (an already sturdy organism!) in temperatures close to the freezing point of water, by genetically modifying the moss with AFP, ultimately making a moss strain that is better suited for the harsh Martian environment.

Resveratrol is compound that is found in red wine, and it is speculated to have potential health benefits. We show here, as a proof-of-concept, that moss can be altered to express endogen pathways, enabling it to potentially produce a wide range of beneficial compounds such as pharmaceuticals in the future.

he Niels Bohr Institute at University of Copenhagen we plan on simulating Martian environmental conditions such as varying temperature, low pressure and high carbon dioxide atmosphere. The experiments will be performed on both wild type and genetically modified moss, changing one variable at a time and investigating how well the moss can cope with the extreme conditions, and whether AFP transformed moss is more viable in a cold climate. Right now we are in the process of programming an Arduino (a small programmable device) to accurately measure and log temperature data.

Ethics
The project is also keenly focused on raising awareness about the ethics of Mars colonization and application of synthetic biology, the benefits of interdisciplinary research and international collaboration. As an interdisciplinary team with, team members from fields such as Astrophysics, Molecular biology, Social Science, Bio-business and Biophysics, we promote international collaboration and hope to inspire more young people to participate in scientific research. This will be done through our outreach programme which will include short films, an ethics workshop and presentations aimed at a broad audience.

We are very thankful to our generous sponsors: