A main research interest of mine within plant biochemistry is bio-active natural products. The focus of my research group is the biosynthesis, transport, storage and degradation of cyanogenic glucosides and elucidation of their role in the ability of plants to communicate with the environment and to defend themselves against attack from herbivores, pests and abiotic stress.

Cytochrome P450 enzymes are found in all kingdoms. They are monooxygenases catalyzing regio- and stereospecific hydroxylation of a range of complex organic molecules.  In plants they constitute one of the largest enzyme families with 273 members in the simple model plant Arabidopsis and many more in most crop plants. Two thirds of the P450s in plants are involved in synthesis of bio-active molecules that enable the plant to defend itself towards insect and fungal attack, to adapt to other environmental challenges and to communicate with the environment. 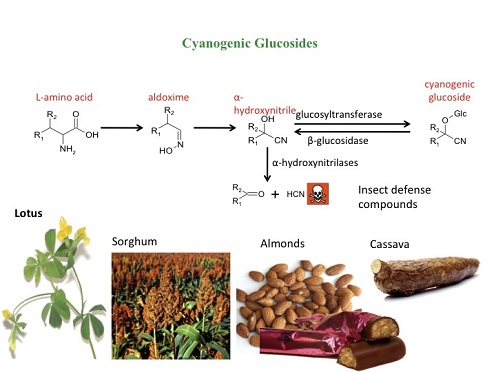 Many different classes of plant defense compounds are known. Cyanogenic glucosides are one such class of compounds present in ferns, gymnosperms and angiosperms. Upon cell disruption, these compounds are hydrolyzed to release toxic hydrogen cyanide gas to provide an immediate defense response. My research group has pioneered the identification and characterization of the cytochrome P450s involved in cyanogenic glucoside formation and shown that this pathway is organized within a metabolon.

Most fungi turn out to be resistant to hydrogen cyanide. I aim to investigate whether the cyanogenic glucoside metabolon disassembles during fungal attack to instead produce toxic oximes at the site of fungal infection. This would represent a currently undiscovered defense system in plants. Such defense systems may also operate in plants producing other classes of phytoanticipins like the glucosinolates.

My research group also investigates plant-insect interactions especially co- and counter evolution and adaptation between plants and insects with special focus on herbivorous insects able to use plant defence systems to their own benefit. Such knowledge is important to developing robust insect and disease resistant crops for the future to meet a steadily increasing demand for food.

In studying the above mentioned topics, I want my research group to master the combination of strong basic biological knowledge, systems biology approaches and to efficiently integrate the new powerful tools of metabolomics, transcriptomics and proteomics in the research.

Other research interests of mine include metabolon formation, self-assembly in biological systems, and molecular modeling. These interests tap into my cross-disciplinary research activities within synthetic biology. Read more here: Link to synbio.ku.dk/research.